Information technology service provider tTech Limited is hoping to grow its business by convincing more small, medium, and large companies in Jamaica and overseas to focus on running their operations, while handing over the development and management of their IT infrastructure, including voice, data and computer systems, to them.

From this line of work in which tTech specialises, the company earned revenues of $284 million and delivered net profit of $27.5 million in 2018.

This compares to revenue of $178 million and net profit of $24.9 million in 2015, the year before its listing on the junior market of the Jamaica Stock Exchange. Its 2019 results are pending.

CEO Christopher Reckord is aiming to improve on its own earnings as more firms come to appreciate the financial benefits of handing over the management, monitoring and support of their IT needs to a service provider. But he concedes that in tTech’s area of specialisation this is not an easy task.

“Many organisations in Jamaica believe that it is best to do everything ourselves. I don’t find the same thing in North America, where the business thinking is that if this is not my business skills and sweet spot, hand it over to somebody else,” Reckord told the Financial Gleaner in an interview at his offices on Duke Street, Kingston.

He notes that younger entrepreneurs more readily embrace the concept.

The company’s core clientele is a mix of about 60 small and large firms. 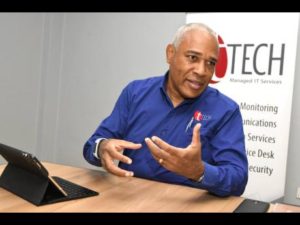 “IT security – that is our biggest growth area,” said the tTech CEO. “Cybercrime, ransomware – it is rampant, here and nobody is talking about it. It is massive,” he said.

The search for greater revenues and profits is taking the company overseas, which Reckord sees as only logical since the competition in the space in which his company operates is both local and foreign.

tTech has joined the growing queue of companies hunting opportunities in Guyana, the English-speaking country on the South American mainland that recently discovered large reserves of the oil and which is projected to lead the world in economic growth this year. Notwithstanding its geography, Guyana is aligned with the Caribbean and is a member and the host of the headquarters for the Caricom trading bloc.

Reckord recently returned from talks with some 10 prospective clients in the Caricom member country, where tTech provides services to GK Guyana, a subsidiary of Jamaica’s food and financial services conglomerate GraceKennedy Limited.

The company has a 10-year planning horizon which includes financial targets that were not disclosed and the intention to open a co-working space in Montego Bay, where the company is said to have a growing clientele. The business is also said to be sufficiently capitalised.

“There is sufficient capital. There is no debt on the books, so we can take on some debt right now, which may happen as we consider M&A (merger and acquisition) activities,” the tTech CEO said, but declined to comment further on the firm’s M&A plans.

Reckord wants to better the company’s financials, but says he is not fixated on chasing numbers this year but, rather, on investing in staff and the company’s capabilities.

With 106 million listed shares which traded up to Monday at $4.60 per share, the company has a market capitalisation of $488 million. It’s nearly twice the company’s market value at listing in January 2016, but is a retreat to around half the levels of capitalisation achieved in 2017 in a bullish market.

The managed IT service provider began operations in 2006 when former CEO and now company chairman Edward Alexander left GraceKennedy as the conglomerate’s head of GK USA and group chief information officer to start his own business. Alexander is the son of former GraceKennedy CEO and Chairman, the late Carlton Alexander, who worked with the food and financial services group for 50 years, having started as a stock clerk in 1933.

GraceKennedy was an early client and its various businesses in Jamaica and overseas are among tTech’s core long-term clients. These include GK USA, Canada and UK. The first client was Gateway Shipping, which took over the accounts of GraceKennedy Shipping when it exited the business in 2003. The GK Pension Plan is also among the top 10 investors in the tech firm.

tTech has grown staff from four, when it started, to 45 today. Reckord’s association with the company began in 2013 as a consultant. In 2016, he joined the staff and has been CEO since 2018, when he replaced Alexander.

Reckord says he has no plans to offer the gamut of IT services that are in demand, but is focused on what he calls “break-fix” services – simply responding to the need to repair faults on a system – and proactive maintenance.

He said that the company has had to turn down some jobs that fall outside of tTech’s focused services, while pointing to obsolete equipment, lack of documentation and an absence of licences as some of the common shortcomings of firms that require managed IT services.