Christopher Reckord: The Man Beneath The Jacket

Home Blog Christopher Reckord: The Man Beneath The Jacket 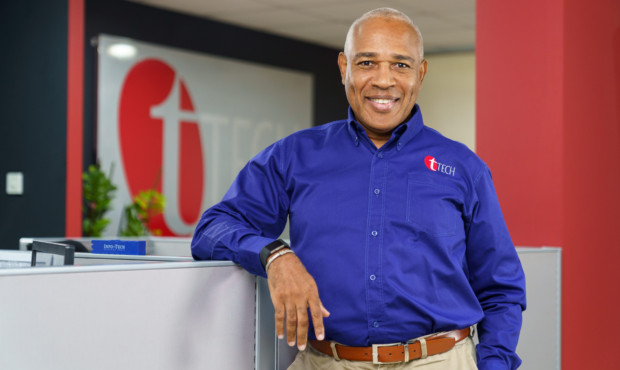 Christopher Reckord: The Man Beneath The Jacket

GORDON CHRISTOPHER Reckord is a lifelong learner with a positive mindset and eyes set on constant growth. You may not know him by his first name, but that’s fine; he does not use it much. He lives to help people by either dragging and pushing them up the success ladder.

Still, when you hear his name, instantly you should think technology. He’s the CEO and former acting director of sales and marketing of tTech. To date, he has over 25 years of experience in the information and technology industry. He worked as the director of e-Learning Jamaica Company Limited, executive director of Innovative Corporate Solutions, and formed several technology companies with partners. But who is the man beneath the jacket?

He’s a charismatic, innovative, outspoken and quick-witted family-oriented fellow. He has come a far way from the little shy guy with a stutter and being a “bookworm” back in Lucea, Hanover, and the initial days after moving to Kingston. Reckord is still an avid reader but has put aside his Hardy Boys and Nancy Drew collections.

The father of two has a creative pair of hands that keeps his name on the tips of tongues. Yes, he’s a multitalented, successful individual, but his daughters are his greatest accomplishment. However, he may very well be the photographer you hire tomorrow, the disc jock who’s manning your sound system, the writer who informs you about wines, or the man to transform your business into a blooming enterprise.

He believes that there is much to gain from reading and attests to the power of knowledge enclosed in a book.

“Everything I get into I have to find a book and study it, and not just school books. My favourite is How to Win Friends and Influence People by Dale Carnegie, and I have a micro version that I normally walk with. It is a very important foundation for everybody,” he told Outlook.

In fact, he gained a lot of proficiency in operating a sound system from the good old books. Starting out while in high school, Reckord has been spinning records for years, 15 to be exact. And he does not intend to call it quits anytime soon. Even when he started his teaching career at Mona High School, nothing could have taken him from behind the system. He was a teacher by day and selector by night.

“If I could change something historically, I would have taken on a sport instead of substituting music for it. My father was a well-rounded and avid sports player. He played cricket, football and athletics. But as my brethren would say, him lose after me,” he said, before bursting into laughter.

Would he change anything else? “Yes, my belly is too big!” he replied, rubbing his tummy and grinning.

His induction into the information and technology industry came with the role of a computer technician. His luck struck, causing him to impress his interviewers by fixing a computer on the spot, but little did they know that he did not know anything about the role.

As the years elapsed, Reckord kept improving and attracting companies through his expertise. It even afforded him many opportunities, including his introduction to wines.

Ask him anything about wines and Reckord will have an answer: after all, he’s the wine guru of Jamaica. Not wanting to be left out of conversations after accepting a job abroad, he opted to learn about the exquisite vino variety. And as usual, he bought some books and enrolled in a wine course. Upon returning to Jamaica, he opened the country’s first wine bar and even though it has closed its doors, he still sees it as one of his major accomplishments. He loves French wines.

He has little spare time, which he often uses for meditating and practising yoga.